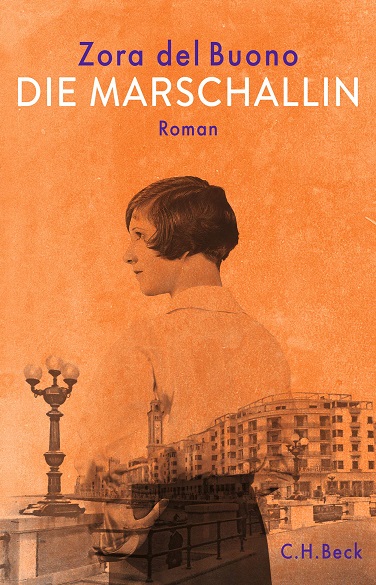 »What else does Zora del Buono have to do to reap the fame she deserves? Her latest novel THE MARSHALESS is yet another great literary success.« Eva Menasse, DIE ZEIT

"An entire stirring century is reflected in the life story of this woman: Zora Del Buono, a stubborn, decisive Slovenian (...) Her granddaughter, the Swiss author and architect Zora del Buono, has packed this mad biography into a gripping novel." - freundin

"detailed, complex and refined as Zora's house in Bari. Entering a new chapter in her novel is like opening a door to a new room in Zora's grandmother's life, in which unknown abysses open up: criminals and fascists, political exile and ideological blindness, homophobia and corruption, misogyny and elitism disguised as cosmopolitanism. (...) On Netflix, "The Marshalless" would be classified under "films with strong women." - taz

"Del Buono created a heroine as tough as she is interesting. From her biography, a story of the 20th century emerges, favouring the unusual, but never slipping into the curious. The fact that the novel is stylistically [also] an unheard-of pleasure, without any phrase or pretension, makes it a double happy special case." - Der Spiegel

From her grandmother, Zora del Buono inherited not only her first name, but also a family catastrophe – Zora senior was caught up in a robbery and murder.

This major family novel tells that story and its consequences.

The young Slovenian Zora meets her future husband, the radiology professor Pietro Del Buono, at the end of the First World War. She follows him to Bari in southern Italy, where the two convinced communists lead a bourgeois and yet politically active life in the resistance against Mussolini’s fascism.

Zora is domineering, impressive, temperamental and talented, an admirer of Josip Broz Tito, to whom she tries to deliver weapons and whose life her husband saves.

Her life and the lives of her family, children and grandchildren take place in a time of wars and violence, embittered territorial and ideological battles that have shaped our world to this day.