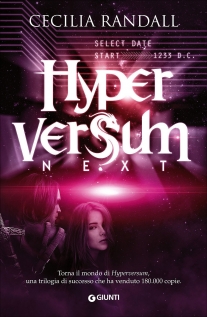 Phoenix, Arizona, sometime in the near future: Alexandra Freeland is furious because her poor grades in physics force her to study all of the time and she has to cancel her first and long-desired date with Brad.

She paces the study of her father, Daniel, like an animal in a cage, until an ancient volume, an illuminated manuscript, attracts her attention. She had never noticed it before, perhaps it was hidden like a well-kept secret. Inside she finds a mysterious card signed by Ian, Daniel’s best friend and step-brother, with a password on it.

Alex turns on her father’s old computer, which she has never seen him use, and discovers an antiquated version of a cult video game: Hyperversum, known for its veracity in recreating the Medieval world. She is tempted! Alex creates and avatar and begins a session.

Saint Germain, northwest France, 13th century: Alex walks through the heart of a lively village, admiring the amazing reconstruction in detail of the shops, streets, and people; but soon her surprises makes way for even stronger emotions.

Hyperversum is not only a video game, it is a parallel virtual reality and Alex does not know how to return to her own life. Unwillingly a witness to a crime, she will discover that her very existence is in danger. This young woman must learn to make her way amid plots and sword fights, as well as to handle her relationship with Marc, the young, troubled and fascinating son of the Falcon of the King.