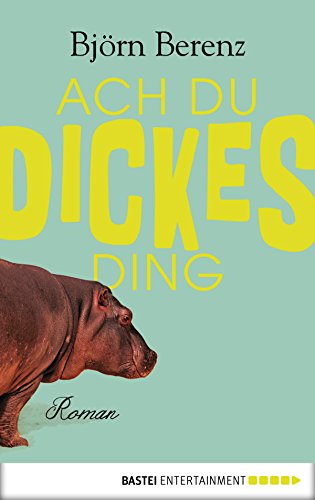 Björn Berenz’s new novel is the perfect entertainment for readers with a warped sense of humor.

Is it possible for someone to be so desperately in love that they think a deceased loved one has returned in the form of an animal?

When Simon, a bank officer, visits the Cologne zoo one day and meets a hippopotamus named Daisy, he is suddenly utterly convinced that the soul of his beloved wife, Sandra, who departed far too soon, has reincarnated in the animal.

Simon is not a nutcase but a man who reasons analytically and actually knows better. Yet the evidence – as outlined in the Buddhist brochure he turns to for advice – is overwhelming.

Just about as overwhelming as the death sentence the zoo director has pronounced for the adipose, impotent, and slightly aggressive hippo, and would like to see as the main attraction of the animal’s next public feeding. But not with Simon around. He aims to accomplish what he was prevented from doing once before: this time he will save his wife’s soul from death by liberating Daisy from the zoo.

But where do you go with a three-ton hippo? Sandra’s greatest wish was to see Katavi National Park in Tanzania once in her life. And if it didn’t work out in her first lifetime, then it will in her second. And so Simon and Daisy set off on a journey together.

This is the beginning of a quirky road trip across Europe, where the obstacles to be overcome include, among others, the police, the mafia, and a violent group of thieves. On the journey to Africa (which they never reach) Simon, with his tons of emotional baggage, finds his way back to life—and a woman finds a direct route to his heart.