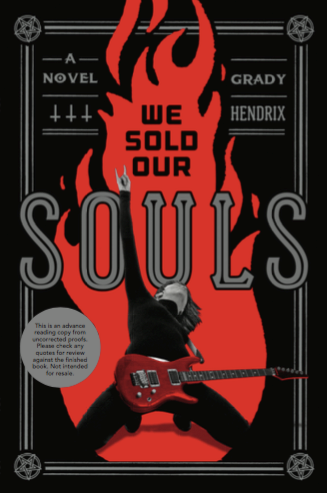 A true horror novel that’s darker and more gory than MY BEST FRIEND’S EXORCISM and, like HORRORSTOR, is set in the contemporary moment, WE SOLD OUR SOULS asks big questions of its protagonist:

When you’ve buried your creative spark under the weight of adulthood’s demands, what will that spark make you do to re-kindle itself into a full-on fire?

When you’ve been forced by forces larger than you to sell out your hopes and dreams, how far will you go to get back to what really matters, and who’s with you and against you on that journey?

Ultimately, what are you willing to risk to speak the truth?

Aging and disillusioned former metal guitarist Kris Pulaski wakes up every morning in her own personal Hell. Two decades ago, she was the lead guitarist in a band on the brink of Black Sabbath-level success–but the lead singer Terry Hunt sold out the band, embarked on a solo career, and rocketed to stardom, leaving his fellow bandmates to fade away into the footnotes of rock history.

Now, Kris barely can pay her bills working as a night shift manager at a small-town hotel–but everything changes when she discovers a shocking secret from her heavy metal past. As it turns out, Terry’s meteoric rise to success may have come at the price of his bandmates’ souls. This revelation prompts Kris to hit the road, reunite with the rest of her bandmates, and confront the greed-fueled man who ruined her life.

Her journey takes her from the economically depressed and de-industrialized cities of central Pennsylvania through an uptight suburbia, out to an unusually sinister drug rehabilitation clinic in the woods, and finally to a Las Vegas music festival that’s darker than any hellscape Rob Zombie could ever conjure.

A furious power ballad about never giving up, even in the face of overwhelming odds, WE SOLD OUR SOULS is an epic journey into the heart of a conspiracy-crazed, paranoid country that seems to have lost its very soul… where only a girl with a guitar can save us all.