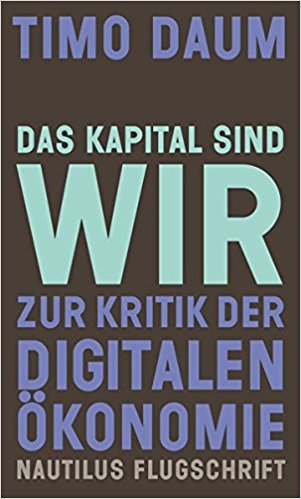 What happens when corporations set challenges of mankind on their agenda?
What will society look like with the internet as the meta-structure of a new digital economy?
What would Karl Marx think about Facebook and Twitter?

If Marx were to resurrect today, he would find a paradoxal situation.
On the one hand, there is the internet, a worldwide supranational infrastructure for communication and production, free and accessible for everyone; there are Unions, equal rights for women, free school education and progressive income taxes.
On the other hand, we would have to tell him, much to our regret, that capitalism still rules, that issues of political representation, social equality and fair resource distribution still appear on the agenda. We would have to tell him that the admirable digital infrastructures are in perfect accord with a new capitalism that does not produce and sell industrial manufactured goods any more, but organizes access to digital data.
Online monopoly companies have a purpose that is not industrial production and distribution of
commodities any more, but organization of access to knowledge and information. Whether it is about
mapping the entire earth, or organizing every friendship in the world, in Digital Capitalism algorithms have become the most important machine, data is the essential raw material and information the commodity number one.
Digital Capitalism exploits less and less living labour power directly. Instead, we, the users, keep it
alive by our own activity on digital platforms: it’s User Generated Capitalism. An army of micro-
entrepreneurs, freed from full-time permanent job contracts and constricting employment laws, is in
pursuit of happiness at the frontier of the digital Wild West: Everyone will be a businessman for
fifteen minutes! The rest of the time you keep afloat thanks to unconditional basic income – a welfare
system perfectly compatible with Digital Capitalism’s principles of deregulation and separation.

Left-wing criticism focusing on mass surveillance and Big Data, or lamenting the loss of hard-won
workers’ rights, falls too short. Digital Capitalism is often critizised from a pre-digital position and
either denied or trivialized as being bound to fail by itself.
But, Capitalism is not in the crisis, and it’s not post-capitalism, either.
Quite the contrary: Digital Capitalism has put the Kyoto-protocol on its agenda, claiming to constitute a new, post-fossil fuel capitalist era.
With inventions such as the self-steering smart car, it challenges Fordism on its very
own ground, redefining its iconic product – the automobile – as a mobile IT-service.