To Err is Useful

An entertaining plea for making mistakes 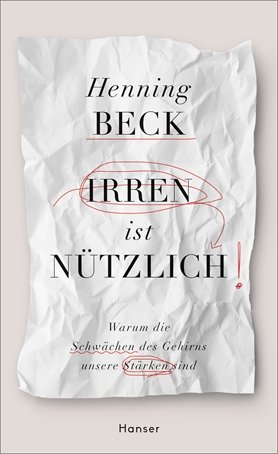 To Err is Useful

An entertaining plea for making mistakes

Challenges for our brain are greater than ever before. We are bombarded by information, and we email, chat and surf at the same time. It seems as if our brains weren’t made for the digital age. We’re constantly distracted, inaccurate and forgetful. But instead, we should be thankful for these inabilities! Because flaws in thinking – as brain researcher Henning Beck shows us – help us to be creative, and this is something that artificial intelligence will not achieve even in 100 years’ time.

Beck takes a look behind the scenes of the most faulty biological structure in the world – our brain. He shows where exactly its weaknesses are, and believes a surprising plea to be a mistake:rather than aspiring to efficient thinking, we should concentrate on the clever organisation of knowledge. How does that work? With breaks, for example, and “clever forgetting”. This neurobiological encouragement helps in an unusual way to improve concentration, strengthen decision-making and higher creativity.
Why flawed thinking is the brain’s secret weapon

How we turn forgetfulness and lack of concentration into creativity