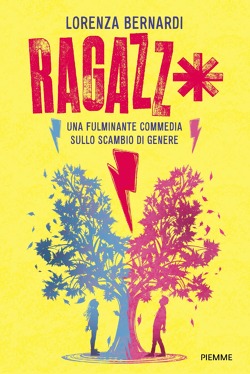 A lightning-fast comedy about gender swapping, a blazing story against any gender stereotype

When Professor Frigerio asks her students to think of a topic for the end-of-year show, the boys start to make silly jokes about girls and the girls don’t even react trying to answer to their bad words. Frigerio had an amazing idea. For the script of the show there will be a single rule: the boys will write and play the girls parts, while the girls will do the same with the boys ones. Sara, Nina, Alice, Giovanni, Iachi and Tommi will have to identify with each other and the other way around. But how do you understand what it means to be in the body of the opposite sex? After a night of thunder and lightning, they will have to face a shocking experience that will force them to put themselves in the shoes of others. Literally.