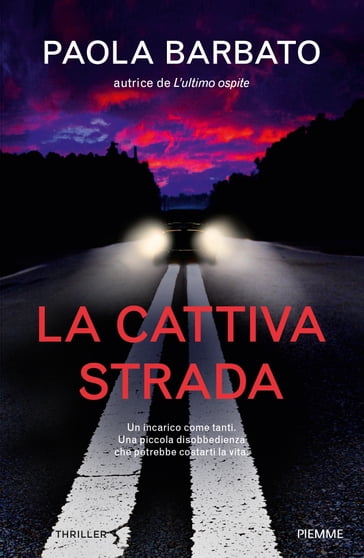 Just an ordinary job.
A small transgression.
And suddenly your life is on the line.

He should have known better than to open that box. It was one of the unspoken rules of the assignment. But he’d been afraid he’d somehow damaged the contents, and thought he could undo the damage, so he’d opened it. Signing his own death warrant. Giosciua Gambelli never expected much from life and life repaid him by the same token, first saddling him with that ridiculous name, chosen by his father, and then with all the things he is not, has not been able to do, will never accomplish. Yet now, at thirty, for the first time in his life Giosciua has finally landed a job he’s actually good at, something that feels just right for him. He is a courier, though he’s never sure what it is he is delivering, and never thought to wonder. Maybe that’s why they hired him. No ambition, no curiosity. They hand him a package, he delivers it, and that’s that. No questions asked, never a glitch. Always at night. But on a night like any other, once he’s seen what’s inside that small cardboard box, Giosciua realizes he is trapped, and must do what he’s never dared before – disobey. And everything changes forever. The anxiety of what will happen if someone were to stop him is overwhelming. And then comes the fear, if ever the senders discovered what he’s seen. Because now he is not the man he was before, the dumb courier who always did as he was asked. Now he is a witness. And he’s seen to many movies not to know what’s in store for those who stick their nose where they shouldn’t. But when a series of chilling signs shows that the one who hired him is close, and follows his every move, there’s only one thing left to do – escape. And there’s only one place where Giosciua can be safe – the highway he is travelling on. And which he can never leave.