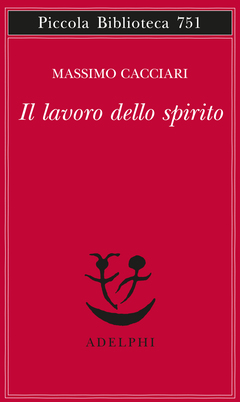 Between 1917 and 1919 Max Weber gave two lectures entitled Die geistige Arbeit als Beruf, which we could translate «The work of the spirit as a profession«. Very meaningful formulation, because it represented the regulatory idea, the project and the hope that had animated the world of the great bourgeois culture between Kant and Goethe, between Romanticism and Schiller, between Fichte and Hegel, and would have constituted the guiding thread of the same thought later revolutionary, from Feuerbach to Marx.

The «work of the spirit» is creative, autonomous work, human work considered in all its active power, and turning to its affirmation means liberation of all activity from the condition of commanded, dependent, that is alienated work.

But its dissolution in the capitalist form of production, in the universal machinism, which engulfs that Science which is also the authentic engine of development, ends up delegitimizing the same political authority, which in the «promise of liberation» finds its foundation.

Is the «steel cage» destined to imprison also that «work of the spirit» which is political practice? Will the spirit of capitalism end up completely destructuring the space of the Politician, reducing it to the form of the contract? Or are there still thinkable and possible relations between Science and Politics that free us from our «debt» towards proceeding without goals or ends of the technical economic system?

These are the current questions that, a century ago, no one asked with the dramatic clarity of Max Weber – and with which, today, Massimo Cacciari is confronted.