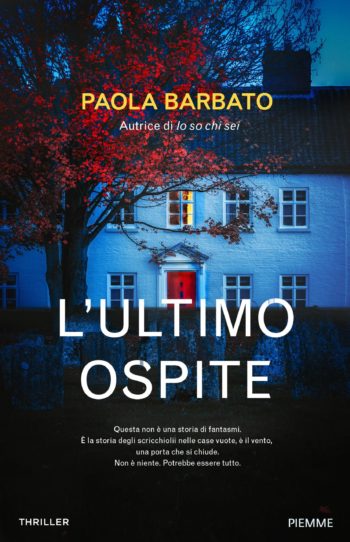 The latest page-turner by an unrivalled queen of the Italian thriller scene will keep you awake without shedding a single drop of blood. Or almost.

At the start it’s just a vague feeling, a creeping sense of unease. The smell of dust and mold, no doubt. But also some sort of dissonance, the feeling that something is wrong. It’s what Letizia feels the first time she sets foot in the ancient, crumbling villa where she’ll be confined for several days along with Flavio, the solicitor who has offered her a new job and a reason to start over again. The ninety-years-old woman who owned the house has died leaving no heirs and no written will, so a host of distant relatives has crept out of the woodwork to fight tooth and nail over the villa. And everything within it.

An ordinary estate dispute, then. But not this time. It’s the small details that just don’t add up. A misplaced throw-cushion. The endless secret closets hidden behind the boiserie. Letizia’s dog, who adamantly refuses to step into the house. And a sudden blue light glimpsed behind the basement windows. It’s just your eyes playing tricks on you, is what Flavio keeps saying, rational as ever. But Letizia sees it differently. And her imagination runs wild when she starts to find traces of a child buried deep within the house – locks of blond hair, small mementos. Why would a woman with no kids or grand-kids collect such things? And why did she hide them? Now Flavio and Letizia are stuck inside the house, with no way out, and however different their respective natures, a terrifying thought starts haunting them both – what if they’re not alone?