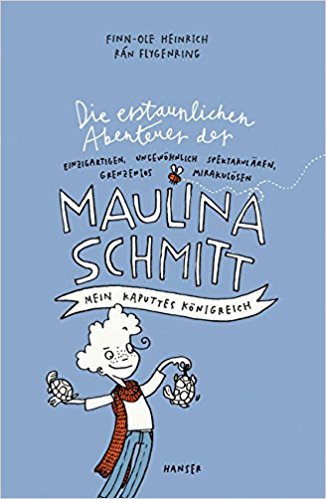 This book tells the story of the summer during which Maulina Schmitt has to come to terms with her parents’ separation, moving house and coping at a new school; the summer in which her father loses his name and rides off on a bike with another woman – and the summer her mother entrusts her with a secret.
Maulina’s world has gone off the rails: she and her mother have moved out of Moldavia, away from their cosy house with the voracious floorboards, blue-white sofas and greasy light switches. Maulina doesn’t understand why they had to move all the way over to the other side of town to »Plasticville«, where everything is totally sterile and there doesn’t seem to be a child in sight. Was it the man who made that decision?
When Maulina is angry, nothing is left standing. And right now she’s furious: at the man, at her school, at the whole wide world. Her one desire is to move back to Moldavia – and she already has a scheme in mind…
Whether Maulina’s scheme succeeds, whether she settles down in »Plasticville« and what will happen