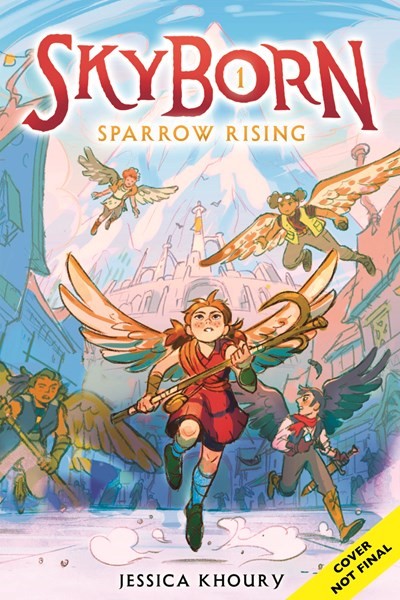 Jessica Khoury brings her masterful world-building and emotional depth to a brand-new fantasy series. In a world where everyone is born with wings, stone monsters prowl the skies, hunting those who dare to fly too high.

In the Clandoms, everyone is born with wings, with tight-knit communities formed around bird types: Jay, Falcon, Crow.
Ellie Meadows dreams of growing up to join the Goldwings — the famed knights who defend all the people of the Clandoms. It was a Goldwing, after all, who saved her life on that terrible day her parents were killed. There’s just one problem: Ellie is a
Sparrow, and the Goldwings are almost invariably picked from the higher clans like Eagles and Ospreys. This rigid hierarchy means that Ellie is destined to become a farmer.
Determined to honor her parents’ memories and prove herself worthy of the Goldwings, Ellie sets out on her own for the capital. But her journey will be dangerous. Foul creatures called gargols lurk behind every cloud, ready to slay anyone unlucky enough to be caught outside in a storm — just as Ellie’s family was. Soon her path intertwines with a colorful band of fellow outcasts, each with their own aspirations… and their own secrets. Ellie’s new friends offer not just roadside companionship. They’ll challenge her ideas of right, wrong, and what truly makes a hero.