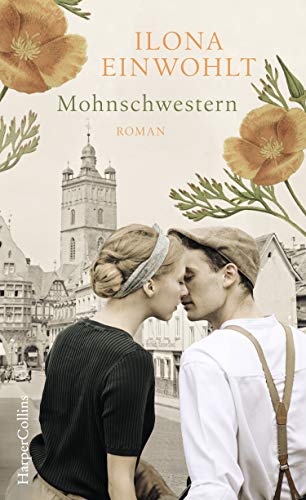 November 11, 1944, Darmstadt: Like almost every evening, twenty-year-old Lotte secretly meets her lover Wilhelm in a hidden cellar room un-der the city. Wilhelm is active in the resistance and engaged to another woman for show. Both are also in the forbidden Swing Youth – a move-ment that identifies itself with secret signs and always runs the risk of being caught, as swing dancing was outlawed. When the bombing raids begin to occur almost every night, the two no longer feel safe in the basement. They flee across the city centre. Wilhelm leaves Lotte behind in a fountain so he can help fight a fire and hopes she will be safe there in the water as the city burns. Lotte remains in the water, which evapo-rates quickly as she becomes increasingly nervous and afraid for their lives, as the water recedes.
Lotte survives the night but she will never see Wilhelm again. All she has left to remember him is a small painting of poppies, a gift that she was able to save when fleeing from the cellar. Lotte is pregnant with Wilhelm´s baby and has to raise an illegitimate child alone in conserva-tive Germany in the 1940s and 1950s.
2018: Hazel is in her late thirties and recently got engaged. She has al-ways done the right thing in life, even when she herself wasn’t up to it. Now she works in a charity for the sake of her fiancé, even though she’s not really sure whether she wants to marry him. With her charity work she visits an elderly woman, Mathilda and she discovers a painting with poppies on the wall, which immediately fascinates her …