Half and half makes you twice as happy! 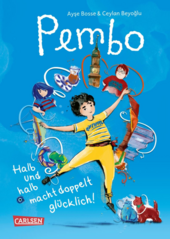 Half and half makes you twice as happy!

One day the girl Pembo has to leave her home with her family and move to Germany. But Pembo doesn’t want to. She loves the sun, the sea and the friends in her Turkish homeland. When she arrived in Germany, everything was gray and strange to her at first. She doesn’t know anyone. She feels torn between here and there. And Papa Mustafa’s new business also remains a flop for the time being. But then Pembo discovers how much strength and how much heart she has to approach the new – and to turn half and half into a round, happy life.

A moving and humorous children’s novel about a girl who comes to Germany with her family.

From the jury’s reasoning of the Youth Literature Award 2021:

«Ayşe Bosse pulls out all the stops to narrate. In addition to bizarre characters, surprising turns of phrase and fantastic elements, cultural clichés are ironically played with. The humorous, pictorial, often verbal language with sprinkles of Turkish words casts its spell immediately There is also a glossary of bilingual lists of words. The artistic, partly monochrome ink drawings by Ceylan Beyoğlu also convey the chaos of emotions aptly. They alternate between dream and reality using a splash of color technique. «