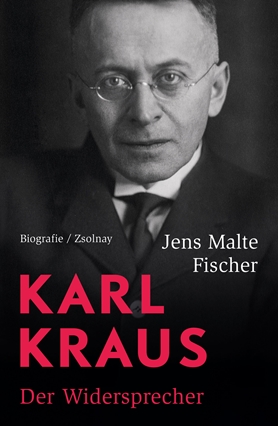 “His monumental book The Dissenter is the product of a lifelong occupation with Kraus, and is shaped by a deep knowledge of his work. The Dissenter is already not a, but the, definitive biography, and will remain unrivalled for a long time to come for anyone interested in Karl Kraus. Ignoring Kraus was a mistake back in 1914. But today, when we are once again in an era of changing media, via which huge corporations pump disinformation around the globe, his insights are perhaps more valuable than ever [...] Fischer has paid Karl Kraus, whom he revered, a great favour. But for all those who, with the help of this master of objection and opposition, wish to understand our world as it continues to go through the apocalypse he faithfully described, he has done an even greater favour.” Daniel Kehlmann, DIE ZEIT

“A historical book as monumental as it is brilliant, an authoritative work... A biography that is simultaneously a story, an investigation and an analysis, so captivating over long stretches that, Fontane or Thomas Mann’s novels, it is really difficult to put it down at times.” Johann Holzner, Die Presse

At the age of 25 he founded Die Fackel, which he wrote alone from 1911 to 1936; Die Letzten Tage der Menschheit (The Last Days of Mankind) was a radical reckoning with the First World War, Die Dritte Walpurgisnacht (The Third Walpurgis Night) took issue with Hitler. According to Elias Canetti, Karl Kraus was “the greatest and most caustic man living in Vienna today.”

Kraus, born in 1874 in Ji?Ín in Bohemia, died in 1936 in Vienna: for some he was God, for others the devil incarnate. His name has remained legendary, but what he represented is beginning to fade. Jens Malte Fischer now brings him into the present with this comprehensive biography. Kraus’s personality and work, his friends and enemies, aphorisms and antagonisms are brought to life to reveal one of the greatest writers of his time and beyond.