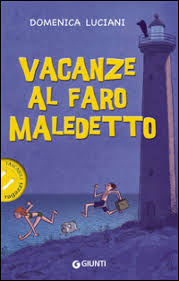 Gerardo Conti, otherwise known as Jerry, is a boy who loves to solve mysteries – James Bond style, who is indeed his hero.

Following his success solving a case of ghosts in a town in Trentino, with his friend Tilla (a story entitled A Holiday at the Cemetery), this summer Jerry and Tilla are once again at the centre of an exciting detective story.

Now on holiday with his parents in Baleful Beach, a seaside town that is not exactly the Caribbean, as its name would suggest, Jerry is joined by Tilla and her inseparable canine companion, Morti. They all stay at the ancient ‘Pensione Ombretta’, where our budding James Bond meets a nineteen-year-old girl of rare beauty named Naomi.

Jerry soon imagines stunning Naomi as his Bond girl and aims to win her over, but in fact, the girl behaves rather strangely … The lighthouse on the Island of the Drowned, which is supposed to have been out of commission and abandoned for some time, is at the centre of the mysterious events. Jerry is sure he has seen it in operation, and certain he saw a cadaver up on the lighthouse parapet.