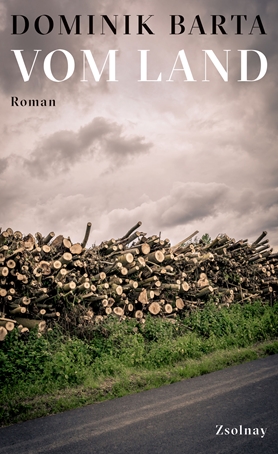 “This text breaks through the coldness of our time and reveals what we are in our core.” Katja Gasser, Austrian Broadcasting

“A debut that captivates the reader from the first page. [...] Dominik Barta’s novel is a subtle milieu study that reveals how xenophobia can develop behind the façade of a supposed idyll.” SRF2 Kultur 52 Best Books

“Vom Land is about conflicting worlds. About the old guard, which spends its evenings in the pub grumbling about the pack of asylum seekers. And about the younger generation, for whom being friends with a Syrian is almost completely normal.” WDR 5

“Rarely has a debut novel convinced me as much as this one. Everything about it is spot on.” Anna Jeller Bookstore, Vienna

When Theresa, around sixty years old and a farmer’s wife, suddenly feels ill, all certainties crumble. Her grown-up children have to travel from wherever they have ended up in order to finally talk to each other again. Theresa’s husband has to learn to accept help and feelings. And even twelve-year-old Daniel has to confront his stubborn uncle Max in order to protect his only real friend. But Theresa is silent, finds no words, no way out.

Dominik Barta continues a great tradition of Austrian literature. With precision, archaic power and empathy, his debut novel is about ordinary people and circumstances.