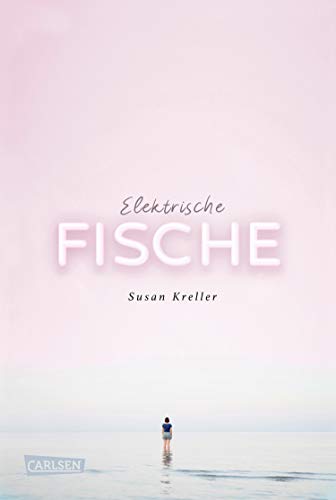 Emma, along with her mother and siblings, has to move from Dublin to Germany’s rural Mecklenburg-Western Pomerania.

She misses Ireland, the Atlantic, and her Irish grandparents. Even the Baltic Sea is no consolation. Emma wants only one thing: to return to Ireland as soon as possible.

Levin, a boy in her new class who’s facing his own problems, offers to help her. But after a while, it seems he doesn’t really want her to leave. Emma, too, gradually begins to doubt the merits of her escape plan…

«For Emma, the first-person narrator in Susan Kreller’s youth novel Elektrische Fische (Electric Fish), one thing is clear: She is Irish, English is her mother tongue, she only talks in German – and she certainly doesn’t know every German word. What is a Tranbüddel? In Germany she feels foreign, abandoned “in a life before our life.” Her Irish grandparents are familiar to her, the German ones seem odd. She would rather have emigrated to America and been greeted by the Statue of Liberty as many Irish in the nineteenth century. Instead, in the remote village of Velgow, the only greeting is from a grain silo on which someone has scrawled “Lügenpresse” and “I love Angelina Wuttke.”

Germany is odd in general. Almost all the shops have closed since Emma’s mother left Velgow twenty years ago. And the Germans put senseless ribbons on their tea bags, in contrast to ribbonless Barry’s Tea Bags. Emma’s older brother Dara, a sixteen-year-old heartthrob, appears to be unaffected by the move. He’s always staring at his phone. Her younger sister Aoife, by contrast, not only has difficulties because of her name, which the Germans simply cannot pronounce correctly. Soon she totally refuses everything and stops speaking.

Emma decides to return to Dublin as soon as possible. To do so, she needs a good idea that won’t involve an expensive flight. Almost more than her homesickness, she suffers from the inconsolable sadness of her little sister.

Then an odd boy her age enters Emma’s life: Levin. He observes her, defends Aoife against her classmates’ ridicule, and plots out a plan for Emma to get her back to Ireland.

Levin is a quiet boy, but whom Emma trusts, and to whom she feels increasingly drawn. In his company, things slip out of her. For example, because she thinks everything is going in the wrong direction, she mumbles the word arschwärts. Of course, in English she thinks, “It’s going arseways.”
But Emma quickly realises that Levin, who is “thin as dune grass” and wears washed-out t-shirts of heavy metal bands like Black Sabbath or Iron Maiden, has his own problems. Emma visits him and meets Levin’s mentally ill mother whose sudden outbursts and fits frighten her.

Susan Kreller was awarded the German Youth Literature Prize in 2015 for her love triangle story Schneeriese (Snow Giant). Her new youth novel is again outstanding. What’s special about Kreller’s storytelling is her economical use of language; every word is well considered. The characters are delicate and fragile, but also strong and proud. Everyone has battles to fight, the children against homesickness and foreignness, their mother against the stigma of being the failed returnee and all of them against the silence and loneliness. And then there’s their Irish father, an alcoholic, a blank space, both in the book and in the children’s lives.

Kreller intersperses her prose with sentences like leitmotifs, such as the song line “It’s been the worst day since yesterday” (from a song by the Irish-American folk-punk band Flogging Molly). Aoife sings the song at the beginning of the book. In a dramatic scene at the end, the line is taken up again when the Baltic Sea, a rather harmless body of water, suddenly becomes a threat. It’s another battle, but it’s worth it.