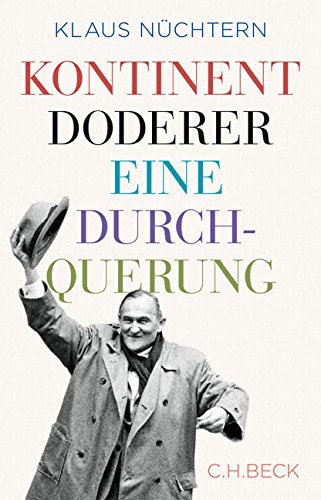 Austrian novelist Heimito von Doderer (1896-1966) is one of the most exceptional authors of the 20th century.

His novel „Die Strudlhofstiege” gained popularity in German-speaking countries and was translated in many languages. However, 50 years after his death, he is almost forgotten and remains largely unknown abroad.

We believe that his work deserves to be rediscovered: von Doderer’s unusually original story-lines abound with action and complex characters, his writing excels in poetic refinement, and above all, it is very, very funny.

Viennese literary critic Klaus Nüchtern travels through the life and work of Heimito von Doderer as if it was a foreign continent. His route follows strictly personal preferences. He spends a considerable amount of time in Siberia, where von Doderer discovered his literary talent during his time as a prisoner of war. Other stations are the famous Strudlhofstiege, of course, and gloomy corridors inhabited by ill-tempered Viennese caretakers.

Klaus Nüchtern is concise without being overly academic, and critical without being too harsh. He traces von Doderer’s career, his membership in the National Socialist German Labour Party (NSDAP) and his success in Austria after the war. Looking at von Doderer’s conservative tendencies and his entanglements with the early 20th century Avantgarde alike, Nüchtern maintains a non-judgmental attitude. This is only fair, given the man’s complex and contradictory character: a passionate voyeur, von Doderer looked down on cinema but had much in common with Alfred Hitchcock.