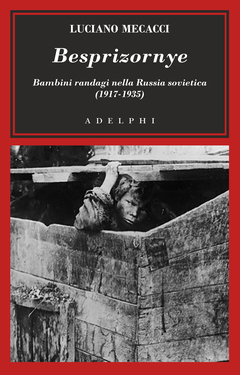 Of all the horrors that plagued the 20th century, few can compare with the condition of besprizornye, post-revolutionary Russia’s label for the countless children and teenagers orphaned by war or famine. Estimated at six or seven million in 1921, dirty and dressed in rags, they wandered on their own or in groups through the cities and countryside in search for food; they clung to the underside of train carriages to travel around the country; they sought shelter from the cold in station basements and rubbish containers; and their hunger made them so aggressive it even drove them to cannibalism. Public orphanages were not an option, as children reduced to skin and bones were packed together in appalling conditions – a dark omen of the future lagers built for other purposes. In the Twenties the issue was studied in social, political, legal, psychological and educational terms; later, however, silence and censorship would be imposed by a State that could never admit to such a stain on the “heaven” of Soviet society.
In the last thirty years, besprizornye have come under rigorous historical scrutiny. Only Luciano Mecacci, though, has been able to fully reconstruct the phenomenon, even from within; he has thoroughly studied direct testimonies and often-overlooked period documents. Thanks to his work, he has been able to immerse himself – and, by the same token, his readers – into the human and psychological abyss of the protagonists of events that, today, might appear simply impossible.