The Composer and his Universe 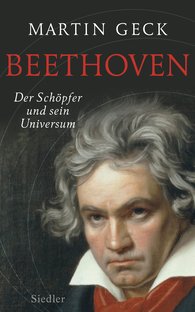 The Composer and his Universe

The famous musicologist and Beethoven connoisseur with a major new biography

In the early 19th century something happened that was no less than a musical revolution: with works like Eroica, Fidelio and his Ninth Symphony, Ludwig van Beethoven created the world a second time. In his latest book, Martin Geck, that «doyen of musicology» (Frankfurter Allgemeine Zeitung) and one of the best connoisseurs of composers, measures the universe of this absolutely exceptional composer in an unconventional way.

In knowledgeable and elegantly written portraits, Geck‘s unusual biography examines Beethoven’s role models, his contemporaries and descendants: What influence did Shakespeare and Rousseau have on Ludwig van Beethoven, who was by no means a child prodigy? What was his relationship with contemporaries such as Goethe, Napoleon and Schubert? And how important was Beethoven on his part for Richard Wagner, Glenn Gould or Aldous Huxley?

Martin Geck traces the bewildering web of relationships, ideas and motifs that have climaxed in Beethoven’s unique works. Thus, with narrative ease, the author looks into Beethoven’s universal importance and demonstrates how timelessly up to date the Titan of music is.