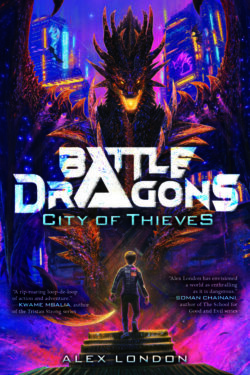 The Fast and the Furious meets Wings of Fire!

In a modern mega-city built around dragons, one boy gets caught up in the world of illegal dragon battles and a high-stakes gang war that could tear his family apart.

Once, dragons nearly drove themselves to extinction. But in the city of Drakopolis, humans domesticated them centuries ago. Now dragons haul the city’s cargo, taxi its bustling people between skyscrapers, and advertise its wares in bright, neon displays. Most famously of all, the dragons battle. Different breeds take to the skies in nighttime bouts between the infamous kins―criminal gangs who rule through violence and intimidation.

Abel has always loved dragons, but after a disastrous showing in his dragon rider’s exam, he’s destined never to fly one himself. All that changes the night his sister appears at his window, entrusting him with a secret…and a stolen dragon.

Turns out, his big sister is a dragon thief! Too bad his older brother is a rising star in Drakopolis law enforcement…

To protect his friends and his family, Abel must partner with the stolen beast, riding in kin battles and keeping more secrets than a dragon has scales.

When everyone wants him fighting on their side, can Abel figure out what’s worth fighting for?