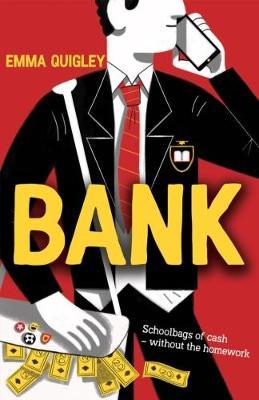 ‘A real strength in the book is the dialogue. It fizzes with energy, and Quigley rolls out typical teenage banter with a skill that makes it seem effortless. Each chapter bursts with imaginative characters, and draws on the reality of those school days where everyone of note has a nickname, often gleaned from a single event or trait that they will never be allowed to outgrow… The similarities with the banking crisis are more than just plot-related. There is also the attitude of the participants, the greed and the apathy, that sense of forging onward without considering the consequences.’ – Dublin Inquirer

Set in a rural Irish secondary school, this is the hilarious story of a bunch of pupils who have the genius idea of pooling their savings, setting up a bank and lending money to their schoolmates at extortionate interest rates. With sure-fire investments like a dating app and performing piglets, our lunch-break bankers are on a roll. But everything that booms must bust, sooner or later, and before long the whole thing starts to unravel.

Fast-paced and hilarious, this book – with its clever parallel to the Irish banking crisis – is worth its weight in gold.