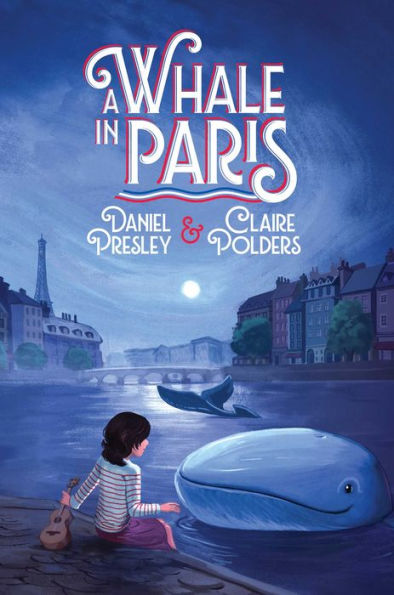 “Chantal’s optimism against overwhelming odds makes her a hero to creatures above and below the water. Overflowing with charm and hope, this novel is perfect for readers who love a touch of the fantastic and the impossible.” Booklist Online

“Franklin, his unlikely appearance in Paris, and his anthropomorphic personality invoke an unexpected but delightful air of magic. Chantal is a compelling and compassionate character. This debut novel set in Nazi-occupied Paris will engage and charm young readers.” School Library Journal

“In this magical-realist adventure set during the Nazi occupation of Paris, a girl whose mother is lost at sea and a whale become beacons of hope. We find humanity in odd places, and feel we too know the mysteries of whales.” Scholastic

A hopeful and heroic girl befriends a lost whale during World War II, and together they embark on a journey to find their families and liberate France.

Ever since the Germans became the unwelcome “guests” of Paris, Chantal and her father have gone out in the evenings to fish in the Seine. One night, hoping to catch a salmon, Chantal spies something much more special: a whale!

He seems friendly, lost, and small (for a whale). Chantal opens her heart to the loveable creature and names him Franklin, after the American president who must surely be sending troops to rescue her country.

But Franklin is in danger: The Parisians are starving and would love to eat him, and the Nazis want to capture him as a gift to Hitler. In a desperate bid to liberate themselves and their city, Chantal and Franklin embark on a dangerous voyage. But can one girl manage to return a whale to the ocean and reunite him with his parents? And will she ever see her own family again?