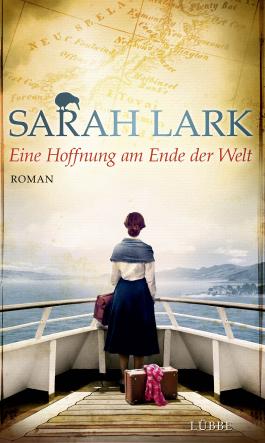 A HOPE AT THE END OF THE WORLD is a poignant love story that moves between Europe and New
Zealand and plays out against a fascinating historical background.

The novel is set in the 20th century and builds on the content of Sarah Lark’s successful «White Cloud” trilogy.
With this new novel we are positioning our successful author on a broader base and making
her available to an even larger audience. Up to now, Sarah Lark’s Women’s Novels have always revolved around the story of an emigrant family. In A HOPE AT THE END OF THE WORLD she takes up the fate of a girl who begins a new life in New Zealand after fleeing from Poland. This reduces the number of characters in comparison to the author’s previous novels, and the narrative focuses on the love story of the two protagonists.

Amid the turmoil of the 1940s, Helena, an 18-year-old Polish girl, and her younger sister Luzyna
are evacuated to Persia. When they are to be granted asylum in New Zealand, Helena draws hope, but only her sister is selected for deportation. When the day arrives, however, Lucyna does not appear at the meeting point.
Helena therefore pretends to be her sister so that she can reach her longed-for New Zealand. She pays
a high price for that decision.
At the same time, James McKenzie is leaving New Zealand. Defying the will of his parents, this daring airman aspires to fight in Europe for the ideals of liberty. Yet once he is there and confronts the reality of war, he reaches his limit and returns to New Zealand. Destiny makes the paths of James and
Helena cross when they arrive in New Zealand. James is immediately fascinated by the shy Polis
h girl and in the end suggests that she accompany him to his parents’ farm. James’s parents are delighted over the guest. The only one annoyed is Moana, daughter of Chief Wiremu in the nearby Maori village. She has been in love with James for years, but the instant she sees Helena, she realizes that she has lost him.
Helena, meanwhile, believes that her affection for James is one-sided; she can’t imagine that the young man could ever feel anything for her.