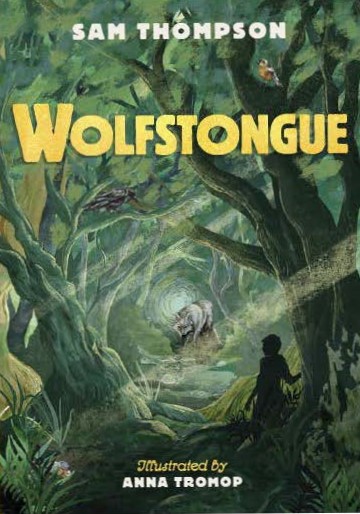 From Man Booker Prize-longlisted author Sam Thompson comes his first novel for children Wolfstongue, a boy with speech problems enters a hidden world of talking animals: a world in which language is power.

Deep in the Forest, the foxes live in an underground city. They didn’t build it themselves: led by Reynard the fox, they enslaved wolves to do the work. By teaching language to the wolves, the foxes have manipulated them with the power of speech.

Now Isengrim and Hersent and their pups are the only wolves left in the Forest. They use clay with magical properties to heal their wounds, and move between the human and animal worlds using hidden passageways as they fight to survive.
One day, Isengrim gets injured. He is helped by a boy, Silas. Silas finds speaking difficult – except when in the company of the wolves. When the foxes kidnap the wolf pups and imprison them in their underground city, Silas is determined to help his new wolf companions to rescue their young.

The wolves tell Silas the legend of the Wolfstongue, a human child who speaks on behalf of wolves. Silas faces his difficulty with language and uses his voice to undermine Reynard’s power. Together Silas and the wolves destroy the foxes’ city and rescue the pups.
Back in the human world, the fluency Silas found with the wolves is gone, but he knows the forest is always near.