The Zoo on the Other Side 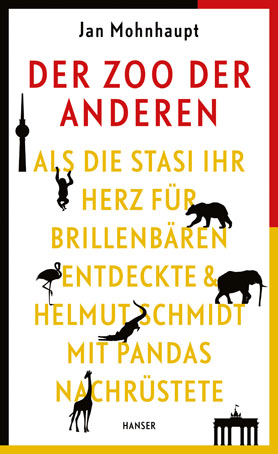 The Zoo on the Other Side

When the Cold War was at its peak at the beginning of the sixties, the arms race in divided Berlin took on bizarre forms: the West Berlin Zoo director Heinz-Georg Klös asked the mayor, Willy Brandt, to top up the elephant population. It was the only way to beat East Berlin’s Tierpark Friedrichsfelde and its director Heinrich Dathe. It was a matter of honour. Thus began the animal arms race which was to drag out for decades and become a symbol of divided Germany.

Jan Mohnhaupt revives its history in a unique way on the basis of the two Berlin zoos and their inhabitants. Whether it was the donation of spectacled bears by the Stasi, headlines like „Western donkey for Eastern pig” or the regular exchange of blows between the strong personalities of the directors, the two Berlin Zoos reveal more about the relationship between East and West than some government statements. With great sympathy for animals and man, Jan Mohnhaupt tells their story for the first time in his brilliant book.

Willy of Brandt’s elephants and Friedrich Ebert junior’s crocodiles: when politics is done with animals

Original historic story based on new sources and eyewitness reports