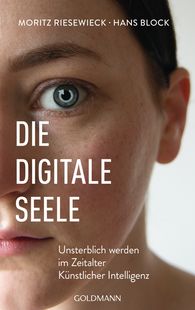 Humanity has dreamt of eternal life since time immemorial. But it’s a dream that has remained unfulfilled –until now.

Thanks to spectacular advances in machine learning, immor-tality is becoming a distinct prospect. Around the world, tech companies are employing vast amounts of user data to create digital doppelgangers, and in the twenty-first century, as more and morepeople turn away from religion, and neuro-science has declared the demise of the very idea of the soul, belief in life after death is undergoing an unexpected renaissance.

In “The Digital Soul”, Moritz Riesewieck and Hans Block take us on a fascinating journey into the Great Digital Beyond, introducing us to the techpioneers as well as to those hoping to immortalise themselves as digital clones, and ask the biggest question of all: What happens to us, when the one thing we can be sure of –our mortality –is taken away?

They conclude that eternal life is indeed possible –but not as we imagine it.