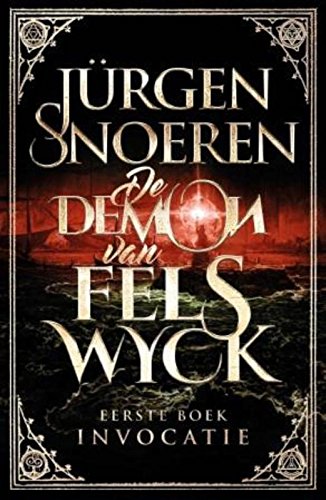 On the streets of Felswyck, there is no thief as adept as Feri. But when she and her allies break into a laboratory one night, her careful preparations prove to be for naught. The owner of the laboratory, the mad Kephris, returns sooner than anticipated. Feri only just manages to escape him, but not before she is a witness to something terrible: Kephris summons a demon of pure kraft, a being that now threatens the lives of everyone in Felswyck and the Western Territories.

Shortly thereafter, Feri is arrested by the men of the tribe lord and he forces her to track down Kephris. He is the only one who can undo the demon’s presence. But when a civil war erupts, all hope of finding Kephris seems to be lost…

In Invocation, Jürgen Snoeren introduces us to the epic world of petty thief Feri, who can scale walls like a spider and who can let locks melt away under her hears. She inhabits a complex world, created with painstaking attention to details, reminiscent of the great fantasy authors of our time. Political intrigue, supernatural foes and many fascinating characters keep the reader glued to the page.

On Felswyck, we follow the main character Feri during one of her raids through the city, until she unwittingly unleashes a demon on her world. A civil war has just broken out, leaving it to Feri to take out the demon. But that is easier said than done, especially when the demon takes an interest in the local political game and begins pitting the leaders of the country against one