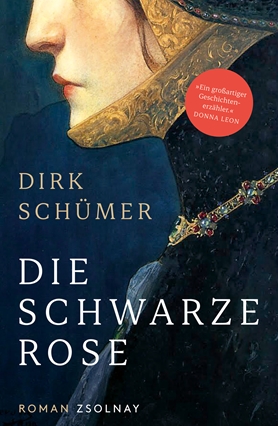 »A historical novel, a love story, an action novel with Tarantino-like splatter scenes, but also a financial thriller - a novel like a film noir, a real pleasure! « Denis Scheck, SWR lesenswert

»Vividly and lavishly, Schümer tells of a Middle Ages that thoroughly mirrors our world today. Naturally, we respond particularly sensitively to criticism of the church now, but the descriptions of predatory capitalism are also up to date. « Simone Dattenberger, Münchner Merkur

»Whoever thought that William of Baskerville had no life after The Name of the Rose will think better of it after reading this book by Dirk Schümer! He is alive! And how!« Michael Krüger

Denounced as a heretic, the most famous German preacher Eckhart von Hochheim had to submit to the Inquisition in the court of the Pope in Avignon in the year 1328.

In the company of his novice, Wittekind, Meister Eckhart witnesses a bloody robbery.

When Wittekind himself is attacked, the pair realise that they are being drawn into a Europe-wide financial fraud scheme.

In the shadow of the Palace of the Popes, the secretive Franciscan William of Baskerville is also on the trail of its perpetrators.

Dirk Schümer’s enthralling historical novel picks up where Umberto Eco’s Name of the Rose left off. We discover a dark metropolis of religion, which has only one credo: gold.