Series Flätscher – What a stinker! 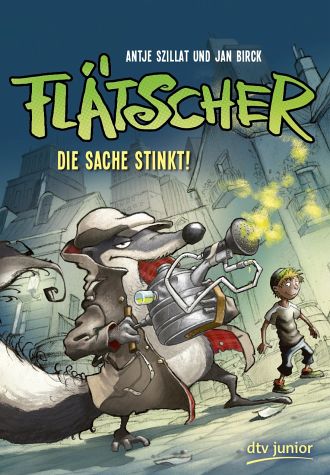 Series Flätscher – What a stinker!

Fletcher, the cleverest and coolest striped skunk in town by a long shot, has made his home in the back yard of the Wild Elk Restaurant—where he also enjoys many an alfresco dining experience – until the day Bode, the head chef and owner of the establishment, cottons on. As a result of this bad break, which Fletcher only survives thanks to his stink pistol, he meets Bode’s son Theo.

The two of them discover that they share more than just a penchant for bread dumplings—they both harbour dreams of becoming famous detectives! Fletcher founds a backyard detective agency right there and then, appointing Theo as his PA, and they soon find themselves up to their necks in their first case: Bode, of all people, who is constantly hunting down poor Fletcher, is in danger himself! With the help of his beautiful secretary Cloe the pygmy weasel and his junior assistant detectives, cellar mice Flo, Mo, Jo, Po and Bo, Fletcher immediately sets about solving the case.
Can the combined forces

• Kick-off to a series starring a hilarious new character. Fletcher, a master detective in a class of his own, is clever, cool, nimble, a little on the vain side – and always ready with a smart reply.
• a fast-paced and highly original children’s book with just the right touch of rule-breaking all children over eight enjoy
• with fantastic illustrations by Jan Birk
• Fletcher guarantees non-stop excitement, fast-paced action, much acci-dental hilarity, loads of chaos and plenty of drama— a massively enjoyable read!