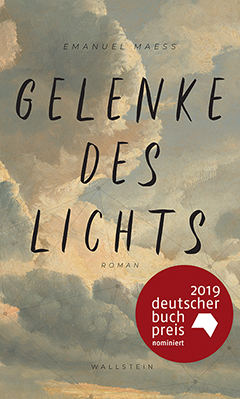 Ever since he saw her dancing on the beach at a Dionysian Neptune Festival, Angelika’s admirer has been in a state of turmoil.
Not only does the encounter have a consciousness-expanding effect on his perception, he is also seized by a grave and all-embracing desire for truth, beauty and self-knowledge. His search leads him from Urspring on the river Werra, a provincial idyll deeply rooted in the past under the shadow of the Iron Curtain, to seats of knowledge and world cities of wisdom. Gods, spirits and demons speak out when the postmodern world of study leaves crucial questions unanswered. Are they too late? All that remains in the end is love, the leap and the junctures of light.

Emanuel Maeß has written an eloquent novel, the playful lightness and depth of which is unparalleled in recent literature.