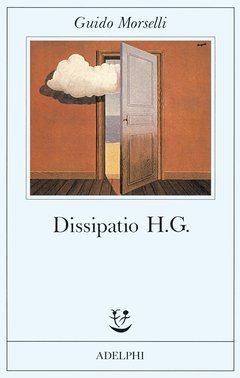 Just as Morselli, tragically overlooked in his lifetime, was destined to be hailed as one of contemporary Italy’s most iconoclastic writers, so was this novel, his last, destined to be translated, at the end of her long and distinguished career, by Frederika Randall. I can think of few works of literature more appropriate for our acutely isolating and endangered times. —Jhumpa Lahiri

I recently had a chance to read a wonderful book, Dissipatio H.G., written by an Italian, Guido Morselli, who subsequently killed himself. I think it would make a highly interesting subject for a film, and you would certainly be the ideal director.—Letter from Marcello Mastroianni to Andrei Tarkovsky

Given the narrator’s—and Morselli’s—views on contemporary society and its endless efforts to eliminate all kinds of earthly friction, one may even read this end of the world as a kind of collective wish fulfillment. One of the questions Morselli seems to have had on his mind is: How alive was everyone in the first place? . . . the echoes one finds in “Dissipatio H.G.” of life during the coronavirus pandemic are, at times, so glaring that some passages read like thinly fictionalized versions of the present. Apocalyptic fiction is often disinterred amid catastrophes, either for their prescience or because they are paradoxically reassuring. Each phase of the quarantine seems represented in this slim novel . . . Morselli is drawn to anticlimaxes, resisting drama at every turn, and it is this instinct that makes his final book so resonant with certain experiences of the past year. —Alejandro Chacoff, The New Yorker

This is a powerful, erudite meditation on existence and the terror of loneliness.—Publishers Weekly

From his solitary buen retiro in the mountains, the last man on earth drives to the capital Chrysopolis to see if anyone else has survived the Vanishing. But there’s no one else, living or dead, in that city of “holy plutocracy,” with its fifty-six banks and as many churches. He’d left the metropolis to escape his fellow humans and their struggles and ambitions, but to find that the entire human race has evaporated in an instant is more than he had bargained for. Meanwhile, life itself—the rest of nature—is just beginning to flourish now that human beings are gone.

Guido Morselli’s arresting postapocalyptic novel, written just before he died by suicide in 1973, depicts a man much like the author himself—lonely, brilliant, difficult—and a world much like our own, mesmerized by money, speed, and machines.

“Dissipatio H.G.” is a precocious portrait of our Anthropocene world, and a philosophical last will and testament from a great Italian outsider.