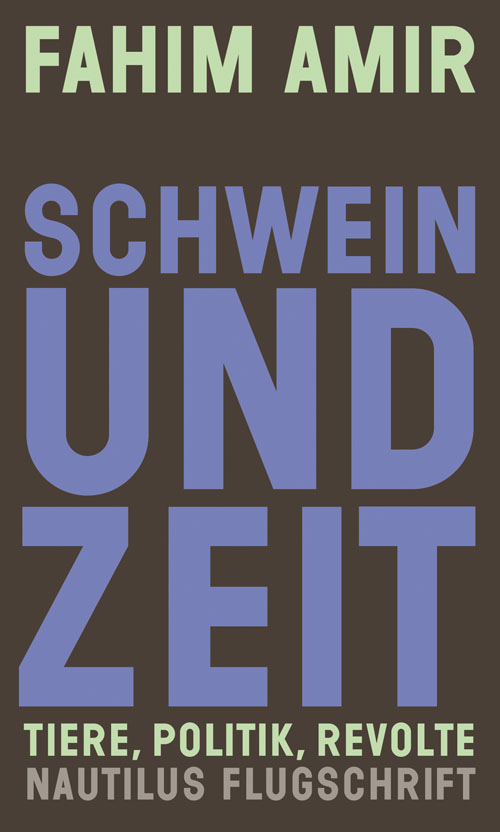 »When it comes to animals«, the left is turning far right«, says Amir and strikes an inspiringcounterblow with Being and Swine.

Bertolt Brecht once hung posters in theatre halls reading »Don’t stare so romantically«. Well, Amir shows that it is high time as well to stop looking at »nature« so romantically.

In most cases, criticizing environmental damage by capitalism or industrial livestock breeding is based in most cases on a conservative idea of an »untouched nature«, sometimes it even praises medieval forms of animal farming. Amir: »While usually no-one except clerical fascists would turn to medieval times when searching for a model for Good Living, the most enlightened minds do so when it comes to animals.«

Politics instead of ethics: If you look for bourgeois DIY-advice on urban beekeeping, this book will deeply disappoint you. Instead, Amir examines the important role of headstrong and unruly pigs in the development of modern factories and reports on the »swinish multitude’s« insurrection – humans and non-humans together – that repeatedly shocked New York a century ago.

Being and Swine is an antidote to any sad cultural pessimism that can only ever see animals as »total victims« of human hegemony. Amir, instead, shows how to see animal history from a perspective of struggle: If animals can be seen as perpetrators, offenders, public enemies and resistance heroes, the slogan »no pity, but solidarity« becomes convincing.

Cigarettes, estrogens and bird’s nests: Birds drinking water from London’s sewage will get veritably doped by the estrogen it contains – which makes them sing far better and find more partners for procreation than their »uncontaminated« fellows. In Mexico, more and more birds weave cigarette butts into their nests, thus diminishing vermin that threatens the health of their chicks. Only two examples of a new ecology that governing politicians and biology teachers likewise would most definitely abhor.

No space is innocent – but so what? We live in Post-Tchernobyl and Post-Fukushima times. There is no turning back to the supposed pureness and innocence of a pacified Garden of Eden. But dealing with urban ecologies might be a real chance for new concepts of conviviality and resistance in surprising places: stubborn grandmas feeding pigeons as a form of public militant mass defiance, for instance. Where there are cities, there are pigeons. And where there are pigeons, there is resistance!