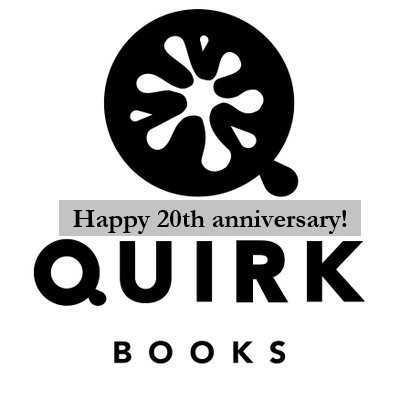 We’re delighted to announce that Quirk Books celebrates its 20th anniversary and we can’t be more proud of them! Ute Körner Literary Agent represent them in all the Spanish and Portuguese speaking countries from a long time now and we’re also big fans of their quirky, unconventional and peculiar books.

As Quirk Books marks its 20th anniversary, the publisher is looking to the future but also celebrating the past: two decades of unconventional, award-winning, bestselling books that truly delight readers.

With popular series such as the Worst Case Scenario Survival Handbook, Miss Peregrine’s Peculiar Children, and Pride and Prejudice and Zombies and new books like What’s Your Grief?, Kid Trailblazers, and Pet That Dog!, Quirk has something for readers of all ages.

“We’ve always tried to be a publisher that looks at the whole package and process and every element of a book as part of what makes them resonate,” Quirk founder David Borgenicht told PW. “It’s our goal for every new title to have something unconventional, attention-getting, compelling yet substantive, and ‘quirky’ that gives the reader multiple reasons to pick our books up, to want them, and to share them with others.”

And while Quirk’s books may be high-concept and quirky, Jhanteigh Kupihea, the company’s SVP publisher, is quick to point out that there’s a whole lot more to the publisher’s list.

“Quirk has always been known for unconventional books,” she says, “but what I love about the list now is that nearly every book is marked by a seriousness of purpose, which we’re bringing to categories that don’t always carry that type of expectation.” Learn more.

Do you want to check out their last catalogues? See here!