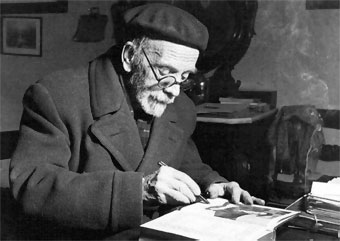 Spanish novelist, considered by critics to be Spain’s most important 20th century novelist. He was born in San Sebastián (Basque Country) and studied medicine in Madrid, the city he lived in for most of his life. His first novel was Vidas sombrías (1900), followed in the same year by La Casa de Aizgorri. This novel forms part of the first of Baroja’s trilogies, Tierra vasca, which also includes El Mayorazgo de Labraz (1903), one his most admired novels, and Zalacaín el Aventurero (1909).

With Silvestre Paradox (1901), he began the trilogy La Vida fantástica, an expression of his anarchistic individualism and pessimistic philosophy, of which the works Camino de Perfección (1902) and Paradox Rey (1906) also form part. But the work for which he became best known outside of Spain was the trilogy La Lucha por la Vida, a moving description of Madrid’s lowest classes, and made up of La Busca (1904), Mala Hierba (1904) and Aurora roja (1905).

He travelled around Spain, Italy, France, England, Holland and Switzerland, and in 1911 published Las Inquietudes de Shanti Andía and El Árbol de la Ciencia, possibly his most perfect novel. Between 1913 and 1935 there appeared 23 volumes of a historical novel, Memorias de un hombre de acción, based on the conspirator Eugenio de Avinareta, one of the author’s ancestors who lived in the Basque Country at the time of the Carlist Wars.

He was appointed member of the Real Academia Española in 1935 and spent the Spanish Civil War in France, returning in 1940. Upon his return he set up home in Madrid, where he lived a life removed from any public activity until his death in 1956. Betweeen 1944 and 1948 his Memorias was published in seven volumes, a work of the utmost interest for studying his life and oeuvre. In all, Baroja published over one hundred books.

Using elements from the picaresque novel tradition, Baroja chose as his main characters people marginalised from society. His novels are replete with incidents and clearly depicted characters and are outstanding for their natural dialogue and impressionistic descriptions. A master of realistic portrayal, particularly when the setting was the Basque Country of his birth, he has an incisive, vivid and yet impersonal style; some have attributed this apparent limitation of registers to a desire for precision and sobriety. He had considerable influence on the Spanish writers who came after him, such as Camilo José Cela and Juan Benet, as well as on many foreign writers, most notable among whom was Ernest Hemingway. © El Poder de la Palabra

The complete works of Pío Baroja is published by Editorial Caro Raggio of Madrid.