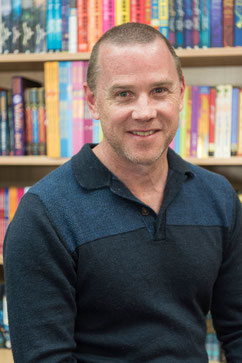 Born into an ever-growing family and raised in the Melbourne beachside suburb of Seaford, Patrick’s childhood consisted of footy, floundering, running through tea tree, bone collecting, and ten part harmonies in the family spluttering bright orange VW combi van. Even back then Patrick was writing stories, with the Powerful Patrick series a serious hit with his parents and rabbit Snowball.

Confusion, insecurity and his desire to be Michael J Fox took him down the corporate path. That took him to Melbourne University and seven years later, after a commerce degree and a three-year stint with a gigantic mining company he realised that he was possibly the world’s worst accountant. That took him to Perth and then back to Melbourne, in pursuit of a career in Sports Physiotherapy. In 2000 Patrick was qualified and celebrated with a dream job at the Sydney Olympics. He’d found half of his career calling. The other half kept nipping away. Poems for retiring colleagues, love letters to Lisa – his first girlfriend and wife to be, epic emails of adventures abroad, stories gathered from the confessional physio-plinth. And then: a flood. Patrick’s first son Noah was born, followed by Reuben and Grace. He’d found his life calling – as a Dad – and with that the second half of his career – as a story teller.