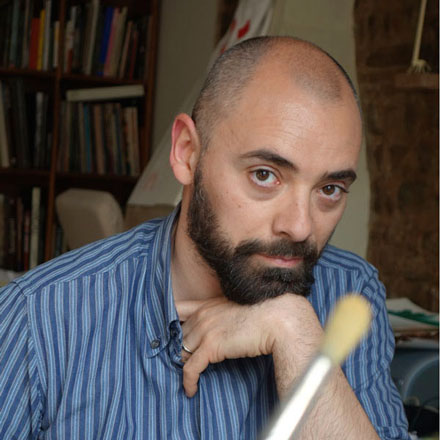 Alessandro Sanna was born in 1975 in Nogara in the Italian province of Verona. He already discovered drawing at the age of eleven, and went on to study graphic design at design school in Verona and noticed during this time that he not only had a talent for graphic design, but also for illustration, in particular for illustrating his own stories.

His debut as a book illustrator came with »Il duello« (2001; tr. The Duel), the Italian edition of the novel »Du-krav« (1982; En. »Duel«, 1998) by David Grossman. Only one year later saw the release of »L’orchestre du chat noir« (2002; tr: The Orchestra of the Black Cat), his debut as an author and illustrator. His most famous works as an author and illustrator include »Hai mai visto Mondrian?« (2005; tr: Have you Seen Mondrian?). In it Sanna takes a look at the life and works of Dutch painter Piet Mondrian. The core of Mondrian’s artistic work – that is, mainly a preference for the abstract over the realistic – is taken on board by Sanna in his book and he tells the story in the visual tradition of Mondrian, and yet in his own style and with his own poetic idea of the artist’s vision. Sanna’s »Fiume Lento. Un viaggio lungo il Po« (2013; En. »The River«, 2013) can be seen as a preliminary opus magnum. The large-format book contains hundreds of differently sized panoramas in which landscape and time unfold showing the rhythm with which the seasons pass on the Italian Po Plain. Sanna lovingly tells without words the stories of different people who live along the riverside and he skilfully balances the narrative pace of his story between hurried busyness and contemplative calm. »Fiume Lento« is an unusual visual experience, above all in its depiction of nature and weather conditions. Sanna’s picture book »Moby Dick« (2013), based on Herman Melville’s 1851 novel, illustrates the famous story of Captain Ahab and the great sperm whale in impressive and differently sized panoramas. The illustrations play skilfully with the mythological and symbolic aspects of the story and once again show Sanna to be a master of storytelling without words.

Sanna has written and illustrated more than 34 books to date. He has also illustrated 32 books by other authors, among these, Italo Calvino and Gianni Rodari. His books have been translated into many languages. He teaches illustration at the Academy of the Fine Arts in Bologna. In 2006, 2009 und 2014 his books were awarded the renowned Premio Andersen. Sanna’s illustrations have been exhibited in Italy, France, Israel and South Korea and published in the »New Yorker«, the »New York Times Book Review« and »Vanity Fair«. He is seen as one of Italy’s most important contemporary illustrators. Sanna lives with his wife, daughter and his dog in Mantua. 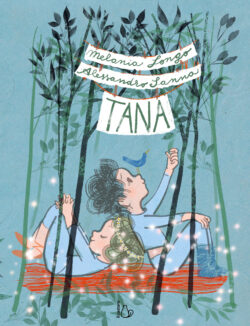