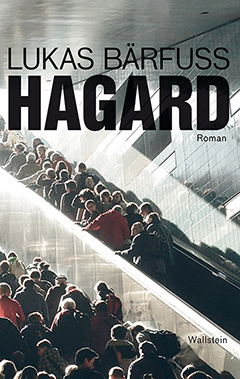 In each one of his novels, Lukas Bärfuss ventures into completely new territory. In »Hagard« he follows a follower; the reader almost feels as though he is inside his head.

A man has been standing at the entrance of a department store in the closing-time rush when suddenly, on a whim, he begins following a woman. He does not know her, and only sees her from behind. But as though he were looking into a mirror, he says to himself: if she goes that way I will stop following her, but if she goes in the other direction I will continue to play the game for a little longer. It means nothing, noone is going to come to any harm, and the distance between us in the crowd is so large that the woman will not even notice. It is more of a sporting challenge not to get lost in the crowd.
Philip has an appointment in just under an hour anyway. But he is already wondering whether he might be able to postpone it – this would give him a little more time before his evening appointment. At first his motivation is unclear. Is the follower simply a bored city slicker? A madman? A criminal? He seems to be running away from something himself.
There is something threatening in the air, something driven. As the pursuit continues, the reader is increasingly drawn into a breathtaking maelstrom of events.

All sensory perceptions are shrouded in an atmosphere of surreal foreboding.

The questions that arise on the reality of life in the 21st century take on an inescapable urgency.